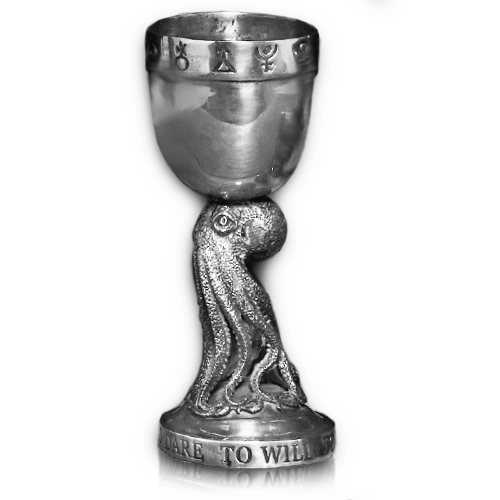 Eighth Ray ritual altar chalice, hand crafted and shaped in the form of the great octopus. Each piece is individually empowered by Master Shamaness Franchelle Ofsoské-Wyber to ensure your magical ritual item is of the highest integrity and fit for sacred purpose.

LIMITED EDITION - CURRENTLY OUT OF STOCK

STOCK AVAILABLE SOON
This exclusive ‘must have’ magical product will be available soon. To go on the waitlist to be notified as soon as this item becomes available, email info@medicinewoman.com

The great octopus with its eight arms is an ancient universal symbol that in the Aquarian Age represents the all-powerful multidimensional presence, protection and influence of the Great Goddess.

In the esoteric teachings of The House of the Bee, the original ancient teachings of the Great Goddess, the great octopus has three hearts that represent divine will, divine mind and divine heart. By working with the great octopus in the Aquarian Age we are symbolically and magically aligning ourselves with the three aspects of divinity: the will, the mind and the heart of the divine.

The great octopus also has eight tentacles and since ancient times, the number eight has been associated with the eight dimensions of the universe, the infinite and limitless possibilities.

The octopus is related to the spiral and spiral symbolism which is representative of the unfolding of creation. The octopus is associated with the eight phases of the moon and with the High Priestess. The octopus has been a prominent symbol in the ancient Egyptian, Minoan, Mycenean, ScandInavian and Celtic cultures.

Important physical and metaphysical aspects have been incorporated into the creation of this ritual chalice so that it is a highly charged, magical item. Created from the highest quality brass and plated with pure silver, the top of the chalice shows the ancient symbols of twelve planets in the solar system. The base of the chalice has written the words of the powerful magical axiom:
TO KNOW - TO DARE - TO WILL - TO BE SILENT.

The octopus rises up from the base of the chalice. The great octopus is an ancient universal symbol that in the Aquarian Age represents the all-powerful multidimensional presence and influence of the goddess.

Write Your Own Review